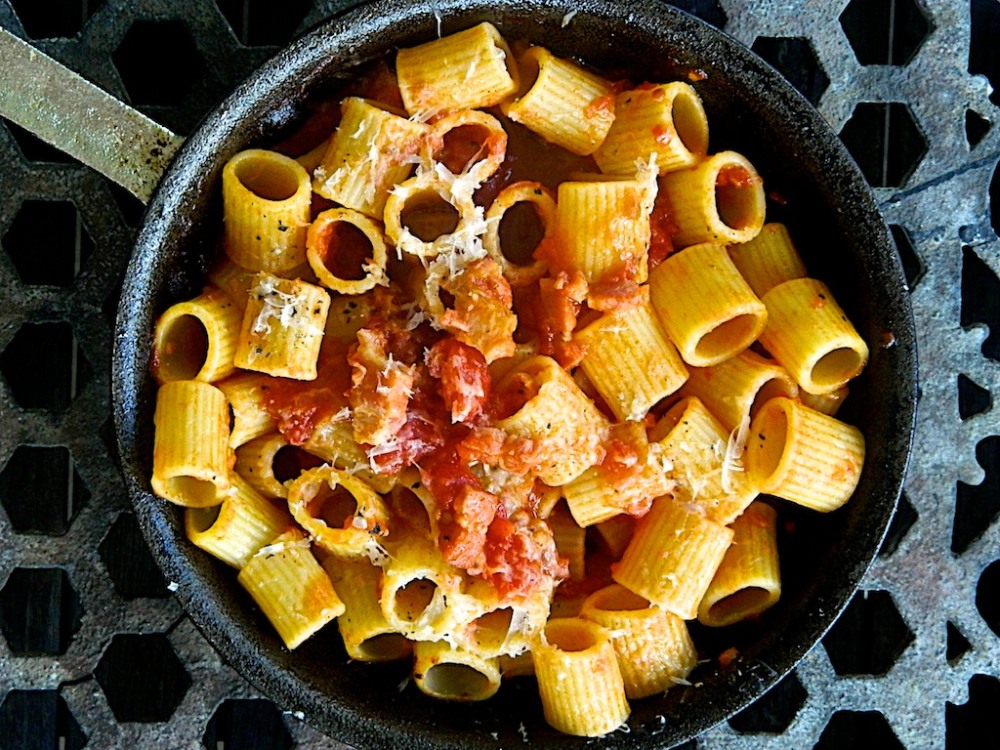 This post is long over-due…I made Amatriciana for my family about a month ago and the photos had been sitting on my computer since then. It was only after I watched an episode of Australian Masterchef, during which one of the contestants had to replicate Cesare Casella’s Amatriciana, that I felt urged to stand up for the authenticity of this traditional Italian pasta dish. Even the lovely and talented Lidia Bastianich, who served as a guest judge on the show, could not refrain her..ehm..surpirse, when she tasted an array of extraneous ingredients in the sauce. It was undoubtably tasty, but Amatriciana it was not. This is one of those dishes that causes animated and feisty conversations at an Italian dinner table. Does it have onion? Is it made with pancetta or guanciale? Is the tomato supposed to be there? It doesn’t really concern me who’s wrong or right, what tastes better or worse. All I care about, in my quest for the authenticity of this dish, now part of Lazio Prodotto Agroalimentare Tradizionale, is to preserve its culinary heritage. Amatriciana is told to be the direct offspring of Pasta alla Gricia, which used to be made with guanciale (pork cheek) and pecorino only and to this day it is still a popular dish, in its simplicity, in Central Italy. Sometime in the 18th century, some innovative cook from Amatrice, must have decided tomatoes would be a valuable addition to the Gricia recipe, turning this peasant meal into one of Italy’s most loved exports. Even the choice of pasta is dictated by tradition. Originally it was Spaghetti, but these days Bucatini and Rigatoni are well tolerated. A friend of mine from Amatrice, Massimo , will tell you that any other pasta such as penne or tagliatelle is not simply to avoid, it is to be forbidden!

a tablespoon of white wine vinegar

Salt and pepper to taste

1. Fry the guanciale or pancetta in EVOO . Keep the flame low to allow the fat to render and the pork to develop a sweet flavour. When it’s starting to get a nice sun-burnt colour, add a sprinkle of chopped dry chillie and glaze the pan withwhite wine vinegar and  dry white wine. The acidity will balance the richness of the caramelized cured pork.

3. Return to your sauce. When the alcohol has evaporated, add the tinned tomatoes (or passata) and allow to cook for 20-25 minutes over low heat. Taste for salt and adjust accordingly.

4. When the pasta is al dente, drop it into your sauce, with a couple of tablespoons of acqua di cottura (pasta cooking water). This will help to bind the sauce and achieve a creamy consistency. Turn the heat off and mix through a very generous amount of pecorino and freshly ground black pepper, if liked . Let it rest for a few minutes before serving, to allow the pepperiness of the cheese to impregnate the pasta.

Open a bottle of Montepulciano D’Abruzzo, and you are already in Italy.